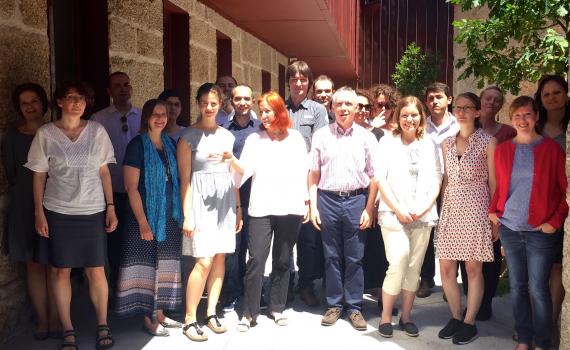 Representatives of FOSTER partners at the launch meeting of the second phase of the FOSTER project in Portugal in May 2017.

European Union (EU) member states and the European Commission (EC) have taken a number of steps to ensure that research and innovation are more aligned with social needs.

Among these was the initiation of the FOSTER (Facilitate Open Science Training for European Research) project. The FOSTER project encouraged the use of open science, a research model that makes research more visible and accessible, exposing results to wider analysis and allowing researchers to re-use results for new discoveries.

There were two phases of the FOSTER project. EIFL’s involvement, in leading, coordinating and contributing to training, spanned both phases.

The first phase started in February 2014 and ended in August 2016. The project supported research stakeholders in Europe, especially young researchers, to adopt open access (OA) and to comply with OA policies and rules for implementation of the EU’s flagship 80-billion Euro funding programme for research and innovation, Horizon 2020 (H2020).

The second phase started in May 2017 and ended in April 2019. The project  contributed to a real and lasting shift in the behaviour of European researchers  by supporting open access, open data and open science practices of early career researchers. The aim was to ensure that open science became the norm in research.

OVERVIEW OF THE FOSTER PROJECT

EIFL contributed to the FOSTER project by -

All project publications are available here.

Join the FOSTER community of trainers and view and download materials from the Open Science trainers' corner.