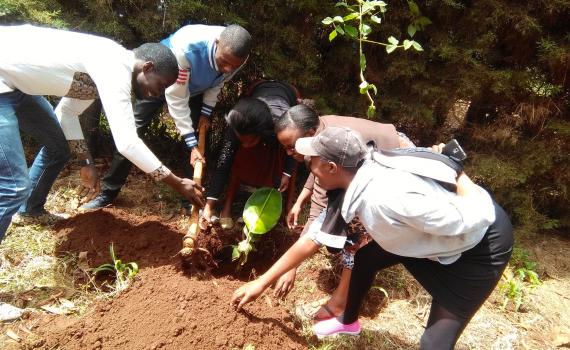 By combining technology skills, entrepreneurship theory, and practical experience in growing and selling crops, Meru Public Library is changing the attitudes of young people to farming.

Meru is the main commercial centre for an active and productive livestock, vegetable and fruit  farming community in eastern Kenya. However, there is concern that agriculture will decline because young people do not see farming as a career.

“Young people have the mentality that farming is for old people. They do not think farming is cool,” said Richard Wanjohi, who heads up Meru Public Library, which is a branch of the Kenya National Library Service (KNLS).

Making a difference through three programmes

Richard realized that Meru Public Library could make a difference by bringing together three programmes.

Firstly, the library was managing a 100 square metre farm in the library compound, to give interested library users hands-on farming practice. Secondly, they were already training a group of youth (aged 18 to 23) to use computers and the internet, and in leadership skills to improve their chances of employment. And thirdly, the library was facilitating a popular learning circle on the topic ‘Essentials of Entrepreneurship: Thinking and Action’. (Learning circles, which are in-person study groups for people taking online courses are being offered in many Kenyan public libraries.)

“When we invited our youth to join the learning circle, adapted for farming, they eagerly signed up,” said Richard.

“We trained some agricultural university and college students who were doing internships at the library to research the Ministry of Agriculture’s National Farmers’ Information Service (NAFIS) for information. We also registered them for WeFarm, a free farmer-to-farmer information service that enables farmers to share information via SMS. The students interns then trained the young people in the learning circle to use these useful online information services.

“After our learners complete the learning circle and information training, we allow them to work on our farm. We start with quick growing crops - kale, capsicums and spinach - so our learners can see results. They are now advertising their produce using social media (WhatsApp) and have set up a kiosk for sales,” said Richard.

Since October 2017, when the programme began, 197 young people have completed the farming course, which takes three months.

DOUBLE THE YIELD AND PROFIT

The demonstration farm’s agricultural yield has more doubled since learners have begun using information found online about fertilizers, nurturing crops and harvesting. Marketing and sales skills have more than doubled farm’s profit, which is shared among learners.

The programme is changing attitudes to farmers. Almost half of the learners - 83 - have gone on to start kitchen gardens at their homes: “Having gotten farming skills from the library, I have been able to put my family land into good use to get better produce. That was made possible through the skills and ICT connection to farming. By joining the WeFarm phone application through the help of the library, I am now a solution to problems encountered by farmers in my home area,” said one young farmer.

It is sparking a spirit of entrepreneurship: “The farming skills I have gained have helped me a lot since I can train my village mates who in turn, as a token of appreciation, give me some cash which I later use to fund my small-scale shop,” said Janis, aged 19.

And it is giving unemployed young people a sense of purpose and self-worth. One young man, who was suffering from an overwhelming sense of failure because he had not completed secondary school has started a kitchen garden and sells his produce to raise cash for his expenses. He says his family no longer needs to buy vegetables for home consumption.